Home
US TV news
OFFICIAL ANNOUNCEMENT: Bundesliga going to ESPN+ in US

While it’s been known for some time, ESPN have issued an official press release today on their acquisition of Bundesliga rights in the United States. The rights will last 6 years (end of 2025/26 season). Four matches per season are slated to be shown on the ESPN TV networks leaving the vast majority of matches for the ESPN Plus OTT service. The deal includes Bundesliga-2 matches, the DfB SuperPokal as well as relegation/promotion matches at the end of the season.

This is the 3rd network to feature Germany’s top league in the US in the last decade with GOL-TV losing rights to FOX in 2015 and now a new home in ESPN. 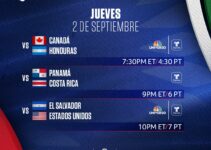